Quilts can be beautiful because of the pattern, the fabric choices and/or the meanings the quilter(s) invested when making it. Taking data as the starting point for designing a quilt pattern offers new opportunities (and challenges) for creating patterns. In this blog, I explore some of these issues in the context of the Monadh quilt.

Monadh starts with the relationship between Munros, Scottish mountains over 3000ft (first listed by Sir Hugh Munro in 1891).

A variety of website share all sorts of data (name, altitude, grid reference, map reference, classification) about Munros so they were a natural starting point.

I spent a long time looking at altitude as the variable I would play with to create the Monadh quilt pattern. My original idea was to represent Munros with flying geese correlated to altitude in a way that the positioning of each Munro would show a spatial relationship to its position in Scotland.  Working with the data told me this wouldn’t be possible because there are just so many Munros in several small areas. I’m still playing with altitude so might revisit this idea when I find a little more time.

Eventually I settled on using flying geese to represent the number of Munros within a given geographic area. I laid a grid over Scotland and carved it up into what would become 8” blocks in the (large) Throw size quilt (64” x 80”) with the most northerly/southerly/easterly and westerly Munros defining the bounds of the quilt - the quilt is not representative of the whole of Scotland.

I gave each of these blocks a number and then started with the information handling part of the exercise. Or as I like to call it, counting!

Observable data is objective (the heights of Munros don’t change). Actually they do. Or more precisely, opinions on the heights of mountains can change as equipment or measurement processes improve - Creag na Caillich and Mullach Coire nan Cisteachan were removed from the Munro classification in 2015 for this reason.

How data is handled when people get involved in making decisions is less objective. I’ve made decisions around the grouping of Munros into varying flying geese sizes. I could have grouped them in 5s or 4s though I chose to work with multiples of 6.

I’ve also made decisions about where to position the flying geese within each block. I did this in relation to where the majority of Munros appeared in the given area. This is a subjective decision, and one that has made the pattern more difficult to piece. Sorry about that! The greater the block variation, the greater the variation in cut fabric pieces.

At the same time, positioning the flying geese in this way adds a sense of authenticity to the design that brings the quilt to life. Munros do not uniformly exist across the landscape. Landscapes are messy. To show this, I designed the quilt using 5 block types: 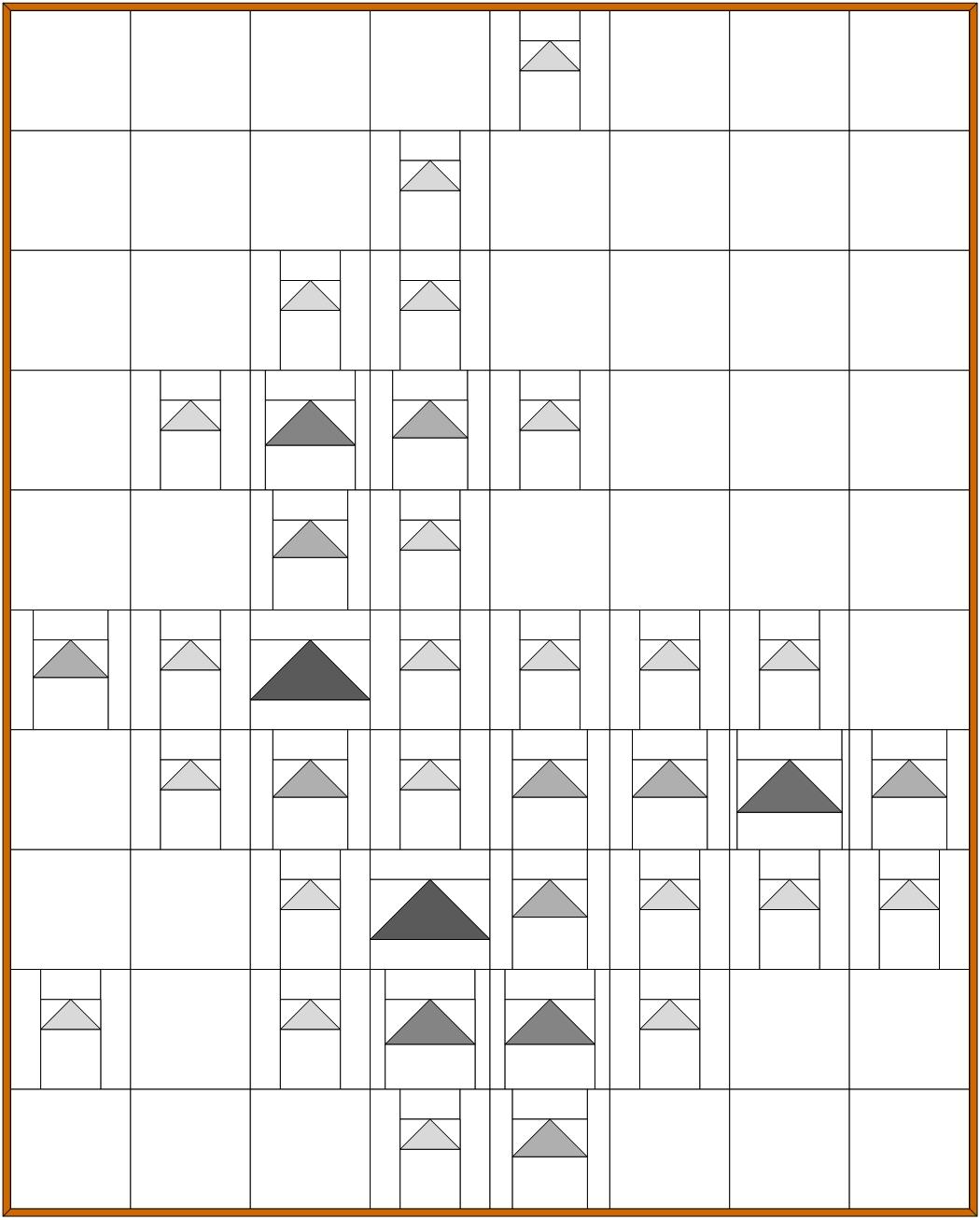 What did I learn?

The information handling process took longer than I thought. Playing with the data and finding a variable I could work with took time. So did the pattern writing. A long time. While the (large) Throw and the Queen use an 8” block, I opted for a 10” block for the King and a 6" block for the small Throw.

This meant redesigning each block rather than scaling up from 8” blocks to 10” blocks (or down to 6"). There’s probably a way to manage scaling in EQ8 (in the way I wanted) which I’ll find later. Redesigning the blocks meant I made further decisions in respect of the positioning of the flying geese with the priority being the use of ½” or whole inch cuts. The result is that the Monadh pattern is essentially 3 patterns in one.

Designing Monadh has been hugely valuable in terms of helping me to explore and articulate the process of designing with data. While the design ultimately does what I wanted, it’s been a labour of love to get to the pattern testing stage.

As a side note, I exhibited Monadh (image below) at the 2022 Festival of Quilts. I quilted this (free motion) on the Beechwood Quilting longarm Bernina Q24 - lovely! The quilting pattern was inspired by the contours of Ben Nevis and the surrounding area which I drew on the quilt top in advance. This resulted in a lot of threads to be buried (probably more than 180). I calculated which way to load the quilt on to the machine based on the fewest threads I would need to bury. This worked well.

I love the contours on the Monadh quilt because they are appropriate to the design.  However, using contours as inspiration raises questions about the purpose of quilting. Where the contours are too spaced out, should additional stitches be included or should the integrity of the contours be prioritised? Should I redesign the geography of Scotland to 'improve' the quilting?

The main lesson here (in piecing and quilting) has been understanding how designing with data involves decisions about the relative importance of the data in the design and the ease with which a pattern can be followed and pieced. Unpicking this relationship, understanding where the balance should lie and articulating the decisions made is probably (one of) the most important considerations I’ll be taking forward..